Solon Osmond Richardson was the son of a doctor and planned to follow in his father’s footsteps. But his father, Dr. Nathan Richardson, also had a sideline.  In 1808, he had begun to manufacture a remarkably effective medicine – an elixir whose effects were almost miraculously efficacious. It was so popular with his patients that he began selling it in convenient quart bottles.  He called it Dr. Richardson’s Bitters. 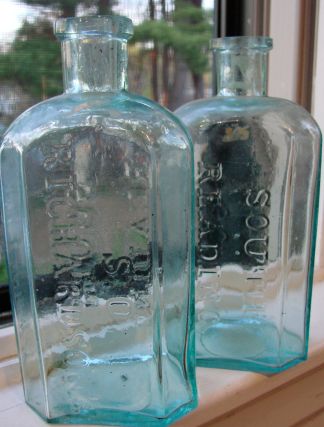 Dr. Solon O. Richardson joined in his father’s practice and also in the manufacture of the product. After his father’s death in 1837, S. O. Richardson carried on both family businesses. But his constitution, alas, was somewhat frail, so he eventually ceased the actual practice of medicine and merely carried on the manufacture of the tonic – after all, the tonic was also contributing to the health and well-being of his former patients. There was no denying the fact that those who followed Dr. S.O.’s prescription of daily dosing soon felt remarkably better … just by imbibing the bitters.

The mid-1800s were the era of patent medicines. Small town doctors, quacks and businessmen of all kinds brewed up concoctions that were guaranteed to cure-all, some riding wagons across the nation selling elixirs in villages, cities and towns. Some were mere ‘snake oil’ salesmen, little more than carnival barkers. These stood in stark contrast to the medicines that were carefully concocted by physicians like Dr. Nathan Richardson and his son.  At the time that Dr. Solon O. Richardson began to market his product in earnest, ‘proprietary medicine’ was something very new in New England.

Solon O. Richardson may have been a good doctor, but he was an even better businessman. He recognized that, in marketing his product to a wider audience, and to sell his products in far flung markets, he would have to make some changes in the way it was customarily bottled. First of all, the usual bottle, shaped like a wine bottle, would never do for shipment of the product. After much study and research, a new design for the bottle was devised, but there were no nearby manufacturers for such a bottle – a lengthy search found a suitable glass manufacturer in Philadelphia. Next, a convenient method of transporting the bottles had to be found. In the days just before the proliferation of rail transport, this meant that private teams of horses and carriages had to be acquired. Solon O. Richardson transcended each of these difficulties one by one, and marketed his product across the nation.

Before long its success surpassed all expectations, and Richardson Bitters were a significant product for the town then still known as South Reading, Mass.; a labor force was employed to work hard at producing the bitters at Dr. Richardson’s manufactory located on the corner of Crescent and Mechanic (now Princess) Streets, where the Fire Station would later be constructed.

But what were the ingredients of these ‘bitters’? Why, sir, Dr. Richardson and his advertising broadsides might have explained, they were carefully crafted and scientifically brewed from all natural ingredients, efficacious herbs and roots and plants combined with precision and with great care by a physician who was a graduate of the New Hampshire Medical College. Herbs, dried bark, seeds and other plant products and chemicals were combined. To make the mixture palatable, it was mixed with a healthy dose of alcohol. Dr. Richardson’s Bitters, like most of the products compiled by his competitors, were over 98% alcohol.  It was actually no wonder that they made people feel better, when you consider the dosage:

“DOSES FOR MALES – Commence with a tablespoonful, and increase gradually to half a wine glass, or a little more if necessary, and fill the glass with water, THREE TIMES A DAY, half an hour before eating.”

Women were advised to imbibe 2/3 of the males’ dosage, and the medicine was also recommended for children.

The medicine was especially recommended for the ‘dyspeptics’ whenever they felt a ‘wheasiness’ of the stomach. A healthy dose would be almost guaranteed to find relief in a ‘discharge of the bowels.’  “Should a disagreeable feeling in the head be produced,” advertisements advised, “let there be no alarm, as the system will soon re-act.”

At a retail price of 75 cents each or six for $4.00, Dr. Richardson’s Bitters were a great success, bringing considerable wealth to the doctor himself. Luckily for his hometown, Solon O. Richardson was a charitable man. Like his friends and colleagues Lucius Beebe and Cyrus Wakefield, he was committed to supporting the worthy causes in his town. His financial support was instrumental in establishing many civic betterments, including, in 1851, the establishment of a local military company that gained renown as the “Richardson Light Guard.”  He also, in 1869, furnished the brand new Wakefield Town Hall that had been donated by Cyrus Wakefield. A supporter of art, he commissioned two large portraits, one of George Washington; one of Cyrus Wakefield, to be hung in the Town Hall. He also dabbled briefly in the music business with his half-brother Nathan Richardson, but he abandoned this effort due to failing health.

During a social visit to the Main Street home of his good friend Cyrus Wakefield, just yards away from his own home, Dr. Richardson suddenly “was seized with apoplexy” on the evening of August 31, 1873. He died a few hours later, to the universal sorrow of the town.  (In an odd coincidence, Cyrus Wakefield died – also suddenly – two months later.)

Solon O. Richardson’s name lived on in the regiment that carried his name and in two separate streets in his hometown (Richardson Street and Richardson Avenue); the beautiful, distinctive bottles created for his elixir are still avidly sought by collectors of antique bottles.