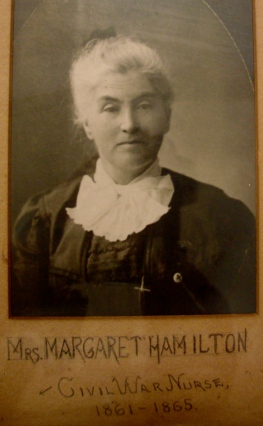 Notes on this courageous woman:  (Will be writing this up in finished form, but wanted to tell her story for Women’s History Month.

Margaret Hamilton served for three years and fell in love with one of her patients, a member of the 19th Maine Volunteers.  She left the sisterhood to marry him.    They raised eight children. “I have taken great pleasure in instructing them in the great principles of patriotism, and it is a standing joke among them that they have “Civil War for breakfast, dinner, and supper.”

She later served as president of the Army Nurses and was a member of the women’s auxiliary of the Grand Army of the Republic, H.M. Warren Post, Wakefield, MA.