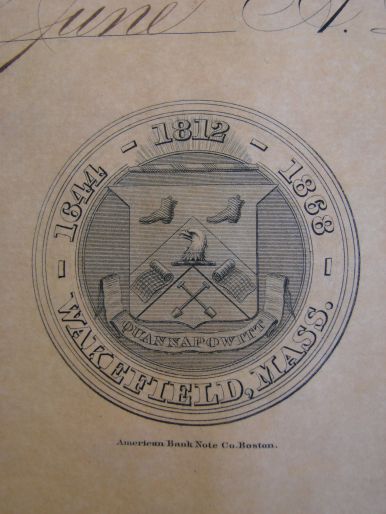 When we discuss the age of any American town, everything is relative, of course, since the Native American settlement here stretches back into prehistory.

For those who might be interested, however, here are the pertinent dates for the settlement and establishment of the town now known as Wakefield, Massachusetts.

1638  The first ‘official’ mention of the area when European settlers first officially explored it.

1639  The area was established as “Linn Village,” which was given permission to incorporate as a town when sufficient houses were built and sufficient settlers had made it their home.

1644  The town of “Redding” was established.  This area, about four mile square,  basically included all of what is now Wakefield and Reading.  The land that currently is encompassed by North Reading was mostly added in 1651.  It’s important to note that the settlement in 1644 was completely in present day Wakefield.  No houses would be built in what is now Reading for another 20+ years.  For this reason, as the town grew, we would always be the “first” part of the town.  (First Parish of the three Parishes, in the parlance and the government of the day.)

1812  A messy divorce from Reading and North Reading.  We knew we were the oldest and the ‘first’ part of the town, but unfortunately, over time, some rancor developed with the other ‘parishes.’  This simmered to a boil in 1768 when the folks of ‘third parish’ (now Reading) refused to contribute funds to the building of a new church for the First Parish, preferring to form a parish of their own (Third Parish)  and build their own church.  When the General Court upheld their opinion, First Parish was furious.  Added to that, after the furor of the Revolutionary War was over and political parties developed, First Parish had a decidedly different point of view than the other two parishes.  But as they grew more populous, even though each of them was smaller than First Parish, together they wielded more political punch.  But by the time of the war of 1812, when the Federalist ‘Precinct’ (North Reading) and ‘Wood End’ (Reading) consistently outvoted the Democratic Republican hawks in the Old Parish, we’d had enough!   We formally petitioned the General Court to split off from the town which we had parented.   We left them with our name and our records, and established ourselves as the ‘new’ town of “South Reading.”  This was the true birth of the separate town now known as Wakefield.

“South Reading” was a miserable name for a town, though, in the opinion of many.  For fifty years a series of attempts were made to change it, taking the matter to the General Court, which for some reason refused our petitions.  (We once made a formal request to be named “Winthrop,” for example, although “Lakeville” did have some partisan strength. )

We never forgot our pride in our heritage, however.   We were the formally established town in 1644.  In 1844 when we approached the 200th anniversary of this establishment, the town fathers voted to celebrate it, and, in a rare show of solidarity, joined with Reading and North Reading to celebrate ‘our’ 200th anniversary.  Thereafter the town’s grand celebrations of its heritage took place every fifty years, with celebrations, memorials, and publications of its history.   This took place in 1844, 1894, 1944 and 1994.

The anniversary of our incorporation as a separate town on February 25th, 1812 has always been largely ignored because of our pride in our antiquity.

In 1868, we finally succeeded in changing our name when we basically sold our soul to Cyrus Wakefield, the wealthy industrialist who employed most of the town and bought up a lot of its real estate and then offered to build us a town hall.  At that point, someone had the idea to try the name change thing again and petitioned the General Court to have our name changed to Wakefield, Massachusetts.  This time they agreed, and we changed our name to Wakefield on July 4th, 1868.

Cyrus Wakefield probably has no greater fan that this writer, but under no circumstances could he be considered the founder of this town.  (For more about him see a his biography, and the history of the industry he founded, and our current exhibit.)

In no way could this be considered the date of our establishment of a town.  It only represented a name change.

If you want to determine our age as a town, you could go along with our traditional establishment date of 1644,